Real Estate: It’s Still a Lack of Supply, Not a Lack of Demand

One of the major questions real estate experts are asking today is whether prospective homebuyers still believe purchasing a home makes sense. Some claim rapidly rising home prices are impacting demand and, by extension, leading to the recent slowdown in sales activity.

However, demand isn’t the real issue. Instead, it’s the lack of supply (homes available for sale). An article from the Wall Street Journal shows this is true for new home construction:

“Home builders have sold more homes than they can build. Now they are limiting their sales in an effort to catch up.”

The article quotes David Auld, CEO of D.R. Horton Inc. (the largest homebuilder by volume in the United States since 2002), explaining how they don’t have enough homes for the number of buyers coming into their models:

“Through our history, to have somebody walk into our models and to tell them, ‘We don’t have a house for you to buy today’, is something that is foreign to us.”

Danielle Hale, Chief Economist for realtor.com, also explains that, in the existing home sale market, the slowdown in sales was a supply challenge, not a lack of demand. Responding to a recent uptick in listings coming to market, she notes:

“. . . if these changing inventory dynamics continue, we could see a wave of real estate activity heading into the latter part of the year.”

Again, the buyers are there. We just need houses to sell to them.

If the slowdown in sales was the result of demand waning, we would start to see home prices beginning to moderate – but this isn’t the case. As Mark Fleming, Chief Economist for First American, explains:

“There’s a lot of conversation around rising prices and falling quantity in the housing market, and there’s this concept, or this idea, that it’s a demand-side problem . . . . But, if demand were falling dramatically, we would actually see less price pressure, less home price growth.”

Instead, we’re seeing price appreciation accelerate throughout this year, as evidenced by the year-over-year percentage increases reported by CoreLogic:

(July numbers are not yet available)

There’s a shortage of listings, not buyers, and there are three very good reasons for purchasers to still be interested in buying a home this year.

1. Affordability isn’t the challenge some are claiming it to be.

Though home prices have risen dramatically over the last 18 months, mortgage rates remain near historic lows. Because of these near-record rates, monthly mortgage payments are affordable for most buyers.

2. Owning is a better long-term decision than renting.

A recent study shows renting a home takes up a higher percentage of a household’s income than owning one. According to the analysis, here’s the percentage of income homebuyers and renters should expect to pay now versus at the end of the year. 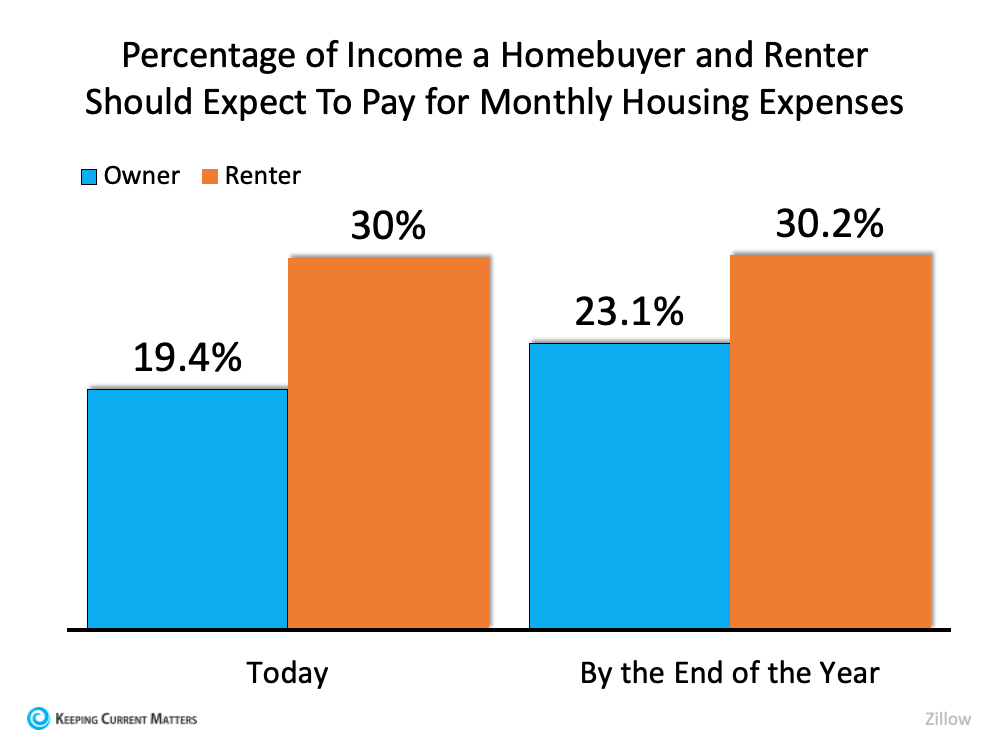 While the principal and interest of a monthly mortgage payment remain the same over the lifetime of the loan, rents increase almost every year.

Whether you’re a homeowner or an investor, real estate builds wealth through growing equity year-over-year. If you own, your household is gaining the benefit of that wealth accumulation. Fleming says:

“The major financial advantage of homeownership is the accumulation of equity in the form of house price appreciation . . . . We have to take into account the fact that the shelter that you’re owning is an equity-generating or wealth-generating asset.”

“. . . once the home is purchased, appreciation helps build equity in the home, and becomes a benefit rather than a cost. When accounting for the appreciation benefit in our rent versus own analysis, it was cheaper to own in every one of the top 50 markets, including the two most expensive rental markets, San Francisco and San Jose, Calif.”

Today, that equity buildup is substantial. The National Association of Realtors (NAR) reports:

“The median sales price of single-family existing homes rose in 99% of measured metro areas in the second quarter of 2021 compared to one year ago, with double-digit price gains in 94% of markets.”

In 94% of markets, there was a greater than 10% increase in median price. That means if you bought a $400,000 home in one of those markets, your net worth increased by at least $40,000. If you rented, the landlord was the recipient of the wealth increase.

For many reasons, housing demand is still extremely strong. What we need is more supply (house listings) to meet that demand.

Give us a call at McPherson Real Estate with any questions about your real estate needs.
#McPhersonRealEstate #Danville #Blackhawk #Alamo #SanRamon #RealEstate

This site uses Akismet to reduce spam. Learn how your comment data is processed.